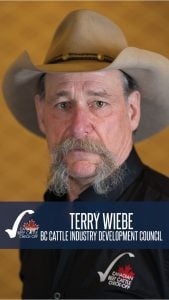 Terry runs 400 pairs and backgrounds 500 yearlings on his ranch near Buick, BC. He relies on the ranch to make his living, and runs his operation with the best interest of his livestock first; low stress and gentle handling for working stock. He buys feed locally, manages his grazing using rotational grazing pracitices and depends on a lot of crown grazing leases. Terry has been with the North Peace Feeder Co-Op and North Peace Bred Heifer Co-Op since 1998, and has been the president since 2000. He was a previous director with the BC Brand Department and Horn Fund, and has taken in many Alberta Feeder Association AGMs, and is always learning from his neighbours. He has also attended some Canadian Cattlemen’s Association meetings and is a past Agency delegate.